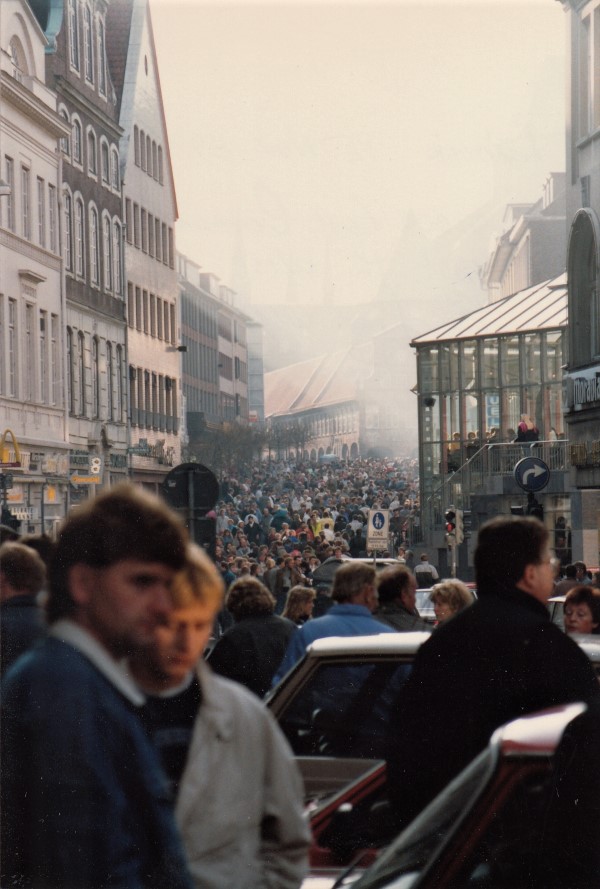 Thirty years ago this month, naval officers on the Canadian Forces Command and Staff Course were taking the annual professional tour of NATO naval and military facilities across western Europe. As usual, the itinerary included Lübeck, on the border between East and West Germany, for briefing by the West German Federal Border Protection service (Bundesgrenzschutz) on the 1,380 kilometre network of fences, fortifications, guard towers and security zones isolating the ironically named German “Democratic” Republic. But 1989 was different. “I don’t know what to tell you” the BGS briefing officer told us. “Yesterday even the cleaners here had to undergo a six month security clearance. Today I have a thousand East Germans in my parking lot!”

While much of the world’s attention focused on the fall of the Berlin Wall on November 9th, similar scenes were playing out along the entire 7,000-kilometre “Iron Curtain” separating Soviet satellite states from the free world. Here in Lübeck, three days afterward, our bus was so blocked by crowds that we had to walk the last kilometre or so to the BGS office. With history unfolding around us, those responsible for organizing our day wisely cancelled the planned program and simply let us wander.

On that sunny afternoon, thousands of “ossis”, as eastern Germans were nicknamed, were mingling with Lübeck’s residents; their inefficient little Trabant cars puffing out polluted exhaust; locals handing out free refreshments from the back of trucks. Many, if not most, had taken advantage of the 100 Deutsche Mark “welcome money” from the West German government to buy goods unobtainable in the East. Bananas were particularly popular, and what seemed to impress most was not so much that they were plentiful, but that they’d been replenished overnight after yesterday’s horde of buyers. The streets had the air of a giant unexpected reunion between long-separated cousins who had not seen each other for over forty years.

The BGS offered a helicopter to take a handful of us to see the border from the air, the lucky few promising to share their pictures on return. What they saw were crews already hard at work on a Sunday afternoon, dismantling the hated barriers.

A year later Germany had reunified, so the College’s 1990 field trip made an unofficial detour to Wismar, 45 kilometres east of Lübeck. Although NATO officers were not supposed to be in the former East, even in civilian clothes, the situation was still fluid and we were keen to understand the place firsthand. Besides, sometimes it’s simpler to apologize than to ask permission. On the way I was poised to point out where the border had been, but there was no sign of it – all evidence it had ever existed was erased.

Wismar itself felt more like 1945 than 1990 – Soviet soldiers still in the streets, the 16th Century church of St George still a ruined shell after a British bomb in 1945. The only redeeming feature was the medieval city centre that survived the bombing had also been spared from the ugly modernist re-developments that blighted so many Western cities in the 1950s and 60s (it’s now a UNESCO World Heritage Site). By the end of 1991 the Soviet Union had dissolved and Russia assumed its legal obligations as the successor state. The future for freedom and democracy seemed bright.

Inevitably I suppose, some in the West couldn’t resist boasting of “winning” the Cold War which, by extension, implied defeating the Soviet Union. Anyone who had interacted with Soviet troops during those disorienting years should have recognized what that would do to the pride and morale of tens of thousands. Despite tacit assurances to Moscow, the NATO military alliance enlarged from 17 nations then to 29 today, effectively eliminating the geographical buffer between Russia and its former enemy. A suspicion of betrayal should be no surprise. In 1989, a 37 year old career Soviet intelligence officer in Dresden had been burning KGB files to keep them from falling into the hands of demonstrators. Ten years later, Vladimir Putin had risen from uniformed Lieutenant Colonel to leader of Russia, determined to restore Russian might and prestige. Meanwhile in China, an obscure 36 year old Communist Party official in Fujian province called Xi Jinping was taking the first steps on a long political path to supreme national leadership, convinced that the Chinese Communist Party must never repeat Soviet mistakes or allow another humiliation by the West. Many Western scholars and ordinary folk blithely banked on a “peace dividend”, assuming liberal democracy to be the pinnacle of political evolution to which everyone aspires. Today they must account for the disturbing resurgence of reactionary nationalism, authoritarianism and tribal religiosity; not only in Russia and China, not just in former Soviet satellites which once aspired so much to freedom, but even within the democratic West itself.

The opportunity to bring a century of warfare, authoritarianism and a failed Communist experiment to a happy conclusion was lost in no small part by Western triumphalism, smugness and complacency. It’s easy to excuse this by saying that vision is only 20/20 in hindsight but, as is so often the case, all the signs were there from the outset, for those with critical minds and eyes to see.